The stars seem to be lining up again. The Central Hawkes Bay irrigation project has had its resource consents approved, with some conditions. The $275m Ruataniwha Water Storage scheme will be a major boost for the local economy and New Zealand agriculture as a whole. The water available can irrigate 20–30,000 ha.

This milestone for the North Island will surely pave the way for the Wairarapa Ruamahunga River scheme that is going through the mill at present, and other possible North Island schemes. There is potential to irrigate up to 30,000ha in the Wairarapa. As mentioned in our last newsletter, this phenomenon labelled by some as global warming is making it blatantly obvious we need water. Seed, soil and water are what make farming a profitable business. Without water it is a gamble. 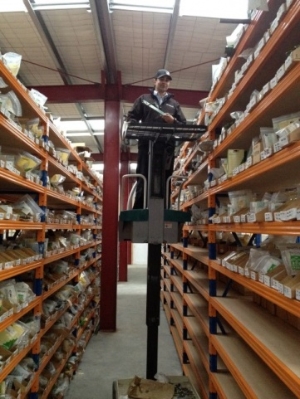 The general economy is doing well. Our financial year matched the previous year, which was a record one for us. Our indent orders to date are over 40% up on the previous year. So a big thank you again to all our customers for the loyal support and trust in our product lines, and an equally big vote of thanks to our dealers for their hard work and loyalty.

Finally, we have some new product lines on the way that are looking really exciting.

The new parts extension is now complete and the parts are being moved across. Two new forklifts have been added to make our service more efficient and storage more economical. One is a walk-behind machine making it very manoeuvrable. The second is a picker only 1m wide that hoists the operator up to the top shelves as our pic shows.

A further office extension has been approved. This will include a long-awaited Board Room that will double as a training room, three more offices plus some storage and amenities rooms. We expect this will be complete in time for the next service school — provided the council approval comes through without any hitches.

The first Krone Big X 1100 to arrive in New Zealand has just finished its first maize season. Sold to Neven Granich Ltd, Matamata, through Piako Tractors Morrinsville, the machine performed well and its output was as expected: amazing. The 12-row EasyCollect 903 header is simple, efficient and, with the auto contour, cuts clean at an acceptable height for such a wide swath. We will have a more extensive report in our next edition. 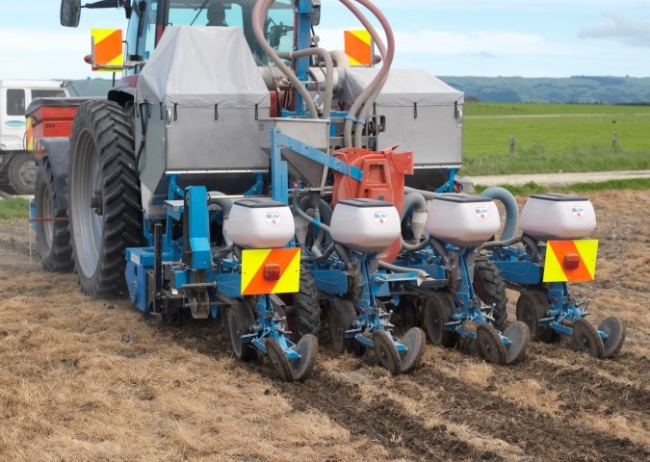 Andrew Tulloch has planted 150ha, including five hectares of fodder beet with the Oekosem Rotor strip-tiller/planter combination. Consider this:

However, this does not take account of the 150 hours to plough and possibly 50 hours to power harrow. The cost savings go without saying.

No specific trials were carried out but it was quite obvious that the strip-tilled crops were similar or even better-looking than adjacent conventionally tilled crops. The result is reduced input cost, less soil damage, less soil erosion from wind or water, and no loss of yield.

Roots need good friable fertile soil to produce a healthy root system that gives the plant the best opportunity to achieve maximum yield. The only reason we cultivate is because the soil is damaged/compacted, so zero-till is potentially a dangerous game. Strip tillage makes a lot of sense.


To date 65 bags have been used, far beyond our expectations; with various crops from grass to maize to whole-crop, alkalage and barley alkagrain. The 3.6m bag offers a vast cost benefit over the previous 3m bag; the 0.6m increase in diameter gives you a 44% increase in volume. Previously, 250-micron bags were used. This coming season we will use a 270-micron bag. Now that we have the costs close to that of stack/pit silage, the additional benefits are huge:
Andrew Tulloch says the real exciting thing is that often while he was bagging farmers from around the area stop in to see the process and are asking lots of questions.

Bruce and son Mark Bateup of Ohinewai who traditionally are grain maize growers decided it was time for some lateral thinking on how they run their operation.

Last season they bought an 8-row Orthman strip-tiller, an ex-demo 6-row planter and a good used Magnum 245 tractor all from Roger Gill Ag in Huntly. We paid the Bateups a visit halfway through the planting period and found Bruce to be rather excited. With conventional tillage they would spend about two hours per hectare by some seasonal staff on land prep and then get a contractor to plant. Bruce said they had moved to spending 20 minutes per hectare on land prep, needed no seasonal staff and were doing the planting themselves.  The resultant cost savings are a no-brainer.

This year, Mark said they put in 120 hectares of grain maize and 60 of maize silage. Despite the pretty dry spell, Mark said they are rather pleased with the yield. They have harvested the crops on the slopes, which suffered the most; he expected the yet-to-be-harvested maize on the flat will yield about 14 tonnes. Overall they are very pleased with their new system – the happy outcome of thinking a bit outside the square.

The introduction of the NG PlusM planter range from Monosem shows their commitment to perfection. The new planter element utilises the proven seed singulation system but now incorporates a shock absorber in the parallel linkage to reduce planter unit bounce. To accommodate this the linkage is spaced wider apart and made more robust. Consistency in row plant spacing is important but uneven germination has a more pronounced effect on yield. Monosem has been fitting its Monoshox on planters in the USA for the past six years. As contractors are pressed for productivity they work at higher speeds, leading to a potential adverse effect on yield. The Monoshox system reduces that risk.

Reducing dependence on chemicals calls for specialist equipment. Monosem manufacture only planters and row-crop cultivators. The SCD cultivator has been around for a long time and can be customised to suit all types of crops. 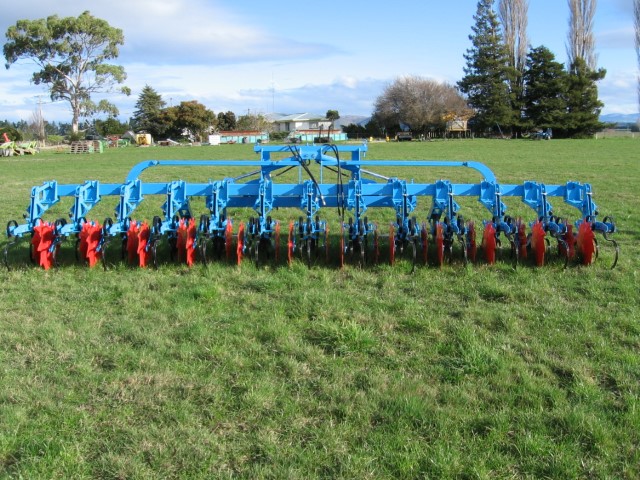 The recently commissioned 30.4m³ 1200T is working very well. Supreme is arguably the best TMR processor range on the market. Their performance and current record sales can only confirm that view. We are delighted that this reputation — and no doubt confidence in the economy — is encouraging customers to see the benefit of paying a premium for a premium product.

The Sky drills foreshadowed in the last issue have arrived and look like a good robust build with some useful design features. Come and see them at Mystery Creek. We are very excited about the potential in New Zealand for these well-built machines.


Out in the field


We depart on the Grasslands trip on 13 May. First stop is Johannesburg to take in the Nampo Agricultural show south of the city. Next stop is Victoria Falls for a few days and then it’s on to the UK for the Grasslands and Muck field days. Then we go to the Krone factory in Spelle, followed by Munich where we visit contractor Christian Steichele who has worked for us in the past. Final stop before heading home from Frankfurt is to Nuremburg to see the MAN factory.

Please remember if you would like to join us on our Grasslands trip in the future, all are welcome. They occur every three years coinciding with the Grasslands and Muck field days, which are held next to the Royal Agricultural Park in Warwickshire. We can accommodate a busload – 45 guests.

Mystery Creek is not far away — 11th to 14th June shortly after we get back from the Grasslands Tour. We look forward to seeing customers old and new. Come in for a chat and a coffee.

Northland Field Days were a bit quieter than usual. The weather was good weather but it was very dry so were not surprised at the reduced turnout. We hope the recent rains have improved the situation in that region. 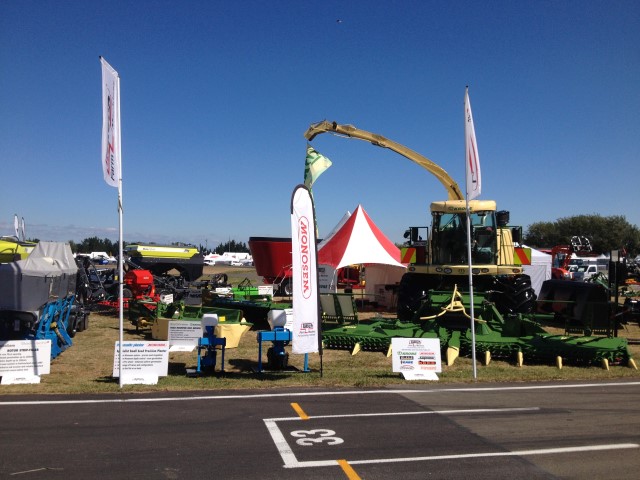 The Central districts Field Days were also a bit quieter. Again good weather meant most were making hay but we did expect to see good visitor numbers on the Saturday. However the event organisers were advised to shut down as Cyclone Lusi was on its way. The storm did not arrive, making for some rather disappointed visitors. 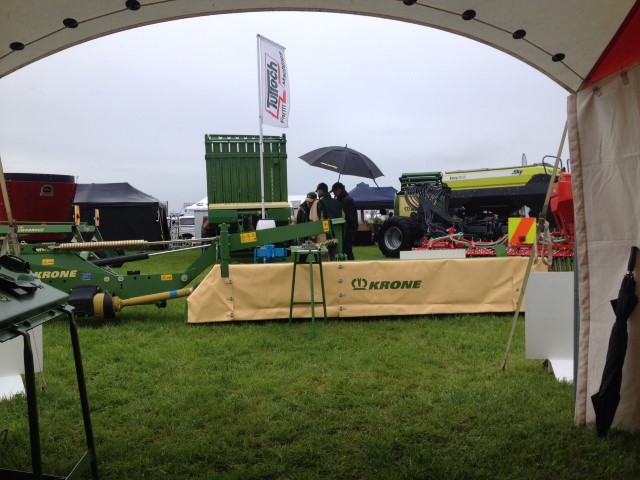 
Some history or, chaos creates opportunity

We all learn from mistakes (one hopes) while others heed what our elders pass on. This year on 28th July we commemorate 100 years since the start of WW1. Obviously someone did not learn because only 21 years later WW2 started. December 7th, 1941 saw the destruction of Pearl Harbor and that brought the war very close to home.

Shortly after, the US fleets came to New Zealand and we were assigned the task of feeding the Pacific Allies. This was assisted by the “Lease-Lend” scheme, which the Americans had adopted as part of their contribution to the war effort — it provided tanks to the British forces, tractors to New Zealand and other concessionary arrangements. In return for the tractors, farmers had to either grow one acre of potatoes or five acres of wheat.

The influx of agricultural machinery during the period from 1939 to 1946 saw the tractor population almost doubled to nearly 19000, the average tractor horsepower rose from 17.2 to 21.4 and the number of combine harvesters rose from very few to over 1300 by 1946. Risks and the rising fuel price due to the war drove fertiliser costs from about £3 16s to £4 per ton in 1942.

Graeme Tulloch remembers when he was a young boy there were only three tractors down their road (Mania Rd) when the war started but a few years later there were seven. His father applied for a Lend-Lease tractor, was successful and had the option of growing either an acre of potatoes or five acres of wheat. He grew the potatoes.