In mid-July, the former head of Krone Machinenfabrik, Dr Bernard Krone visited New Zealand for four days. He was here on business, but he was also accompanied by a group of friends whom he wished to show our country.

Hosting Dr Krone was a tremendous event for us, not just because it further cemented our 42-year relationship with Krone. The brief but busy visit took in a sheep and beef farm, the Mt Bruce Kiwi sanctuary and Rotorua.

They visited the farm to see sheep dogs working and shearing - at which some of the visitors tried their hand.

At Mt Bruce they were delighted by the white Kiwi, feeding of the eels, and the kaka. In Rotorua they fished on Lake Tarawira, visited a marae and saw the mud pools at Te Puia.

Dr Krone said he and his friends had a tremendous time “ …enjoying all that is New Zealand with true Kiwi hospitality…” but admitted the highlight for them were the exceptional lamb shanks in the Gladstone Country Pub!

A father and son toast aboard the Cessna Citation that brought Dr Krone and his party from Germany: Graeme (left) and John Tulloch.

The stormy weather this autumn was not kind to maize growers, particularly those in Taranaki.

Brian Campbell was hard hit by the wind, with close to 40% of his crop downed. With the weather against them, they needed an urgent solution. Brian and son Rusty had heard that the Krone maize header was able to harvest downed crop so they started phoning around to verify this. The responses were positive.

Coincidentally (ESP perhaps?) Brian received a call from TFM asking if he had been affected by the severe wind and, if so, would he be interested in giving the Krone Easy Collect 6000FP a go.

The first crop to harvest was only partially blown down; however the owner had done his own cultivation and spraying, and Campbell Contracting planted it early. There were large tracts of weed in it, as high as the 1.5m maize itself. The head was fitted and put to work with much trepidation.

Impressively, the head never faltered once in the weed. The Campbells say it coped exceptionally well in the down conditions achieving a result beyond their expectations, formed on many years of experience on the coast.

They also say the clients were “ … very excited by the minimal crop left behind, almost as if there had been no down crop!”

From an operational point of view, Rusty says that because the Krone is much shorter it was very easy to drive: “It very comfortably gathered eight rows despite the crop having been planted with a six-row planter.” A credit also to the planter operator, they said.

“The head caused less damage when turning, and it made no difference when cutting down the row or across the row when opening up; there was little need to slow down.”

The calibration of header speed and drum speed was easy for the Campbells to match and gave a good flow and uniform sample as the crop is presented to the cutter butt-first.

Rusty was also excited about the way the header reverses: he explained that they have a lot of iron in their soils and when harvesting down crop they are often stopped by metal alerts. When reversing, the crop is typically dumped on the ground.

“The Krone keeps the stalks standing along the collectors when it’s reversing, so there’s no wastage.”

Rough going in Taranaki maize but the Krone EasyCollect 6000FP is right up to the job.

Those who have a Facebook page can now log in and join us there and keep up to date with what is going on at Tulloch Farm Machines.


This book is open for those interested in accompanying us on the 2014 trip with provisional dates from 11 May 2014 to 1 June 2014. The trip will take us to Spelle and Munich in Germany, Largesse and Paris in France, Grasslands in the UK and possibly Victoria Falls on our way home.

Supreme have been rather busy with a new range of feed processors as well as an additional model to their lineup, the 800T.

The introduction of the new Segue range of feed processors is part of the strategy to appeal to a different sector of the market. The traditional Supreme build specifications have always been well over spec, and so pricing has always been an issue. The Segue range offers processors of a similar spec to the Supreme but without the special AR 200 steel. Drive components are downgraded to that of competitor machines so we can now compare apples with apples. There is a significant difference however. You will still get the patented vertical screw design in the Segue for the fast and thorough blending of the TMR. This now comes at very favourable pricing. The first Segue will arrive perhaps next month. Limited models will be single-screw at 13.1m3 and 15.2m3, plus twin-screw at 15.7m3 and 18.4m3.


The first of the NX range of precision planters from Monosem arrives this season: an 8-row trailed machine set for maize with full specification, designed for planting into normal cultivation or reduced/zero tillage. 
In January we had a visit from Alan Fairbanks of Orthman Agriculture to discuss being their authorised representative in New Zealand. A company with origins back in 1938 in Lexington Nebraska, Orthman Agriculture is one of six companies in the Orthman group which was founded on specialist tool bar manufacturing. It signed OEM agreements with Monosem, John Deere and Agco at the turn of the century.  The specific product that attracted us was the 1tRIPr strip-tillage machine. It is a robust tool designed for soil conservation and improved productivity in row crops at spacings from 20 inches upward. There are already a number of strip-tillage tools in the country of which several are Orthman, as contractors wrestle with suitable concepts to become more efficient and employ tillage practices that are more future-proof for the soil. 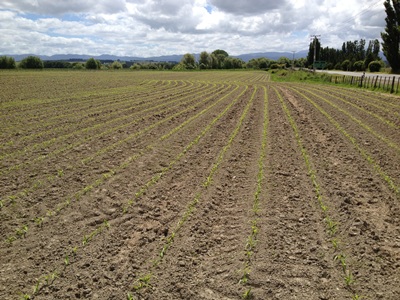 
The first Swadro 2000 has arrived in Masterton. An engineering feat from Krone, the 6-rotor 19m heavy-duty rake has some impressive features. In-paddock and transport steering modes, plus a transport width of 2.995m make the Swadro 2000 a versatile tool. Raking width, swath width and tine height are all easily adjusted on the go. The CCI terminal allows a multitude of machine functions to be easily adjusted to suit the conditions and the individual operator.


The first Big M 420 has arrived in the country boasting the new MAN engine. More powerful at 420hp and quieter, this machine is also more fuel-efficient and uses SCR technology to reduce emissions. Engine cooling has been improved by incorporating a rotary pre-cleaner screen. The new Big M has a more comfortable cab with re-designed joystick and full-colour screen. Servicing is made even easier with redesigned side panels offering easier access.

The highlight of the well-attended dealer conference at Te Papa was the special guest attendance of Mr Bernard Krone (son of Dr Krone, who concluded his flying visit with his friends a day earlier), head of Krone since 18 August 2010. In his address to the conference Mr Krone discussed his company’s current issues and future. He gave the delegates his company’s assurance of its continued full support.

The event went well with delegates booked in at the Amora Hotel, five minutes’ walk from Te Papa, where we enjoyed some light entertainment and a good meal with great company on the Tuesday evening.


Our showroom at TFM is now a lobby. Two new offices were incorporated inside the existing showroom to allow for increasing staff numbers. Part of long-term plans to cater for projected growth of the company, this was driven by the planned introduction of the Big X to New Zealand. The yard has had more concrete laid for more stable forklift use and the storage shed has been prepared for the arrival of stock from our suppliers for this.


Waimumu, Northland, Central Districts and Mystery Creek all went well with good visitor numbers. Field days are always a great opportunity for us to catch up with our customers at a time of year when they're not under pressure and have time for a chat in a relaxed and informal atmosphere.